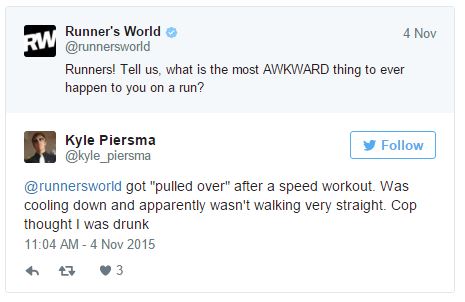 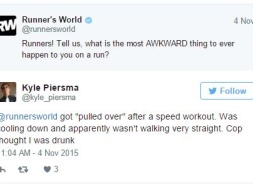 Runners World as this genius question, “Tell us, what is the most AWKWARD thing to ever happen to you on a run?” Here are the hilarious comments. As you read thru these, can you relate to any of these stories? What is your most embarrassing moment? Lesson here? Just keep going! ( check out the video at the end!)

@runnersworld My pants fell down and took my underwear with them. Mooned my entire running group as I was leading. #oops

@runnersworld I fell and a police officer pulled over to ask if I was okay. ? #Awkward #runchat

@runnersworld Ran by a street protest. While turning my head to read their signs, I tripped and fell. They marched on around me. — Emily Seto (@emmers712) November 4, 2015

@runnersworld running down a step hill on sidewalk, in the rain, tripped, did a forward roll, back to my feet kept going. #fallinglikeaboss

@runnersworld got “pulled over” after a speed workout. Was cooling down and apparently wasn’t walking very straight. Cop thought I was drunk — Kyle Piersma (@kyle_piersma) November 4, 2015

@runnersworld Rapid fire farting on the treadmill – directly at the chick on the elliptical behind me. — Leo (@LeoDa5c0) November 4, 2015

@runnersworld I ran through a wedding in Central Park…right through the procession. — steve goldberg (@stevorighthere) November 4, 2015

@runnersworld tripped and fell in front of a bunch of college girls. Got up. They asked if I was ok. My response, “gravity happens.”

@runnersworld running on a treadmill in my college gym and tripped over my shoelace loop. flew off the back and slammed into a wall — Joe Cody (@joecody5) November 4, 2015

@runnersworld Smacked in the head by a falling branch on a windy Chicago afternoon. A trio of little girls pointed at me and laughed. #brats — Larry Todd Cousineau (@LarryTodd) November 4, 2015

@runnersworld A flock of large geese are on my path, I try and go around them but 1 day a goose chased me and bit my shorts! #geesearescary

After our run, my running buddy & I sat down to stretch, and my dog came over and he peed on her back. #awkward @runnersworld @rightshoevan — Stephanie (@Tastad) November 4, 2015

@runnersworld hurdled a trash can on King St. in Charleston to pass a group of tourists only to trip and run face-first into a palm tree. — Dickie (@DC3_TWEETS) November 4, 2015

@runnersworld Going on a 5 mile tempo run at 6:30 PM, getting lost, and showing up an old lady’s house, shirtless, asking for a ride home

You also might like:  Secrets for Staying a Motivated Runner
previous What If People Talked About Other Hobbies Like They Talk About Running
next Morning Run Drama, The Painful Stages Of Getting Ready
Related Posts 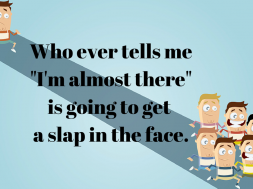 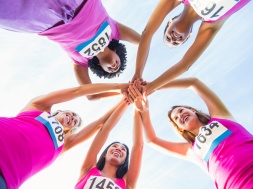 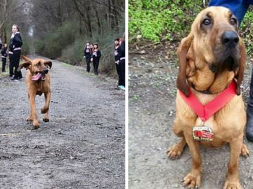